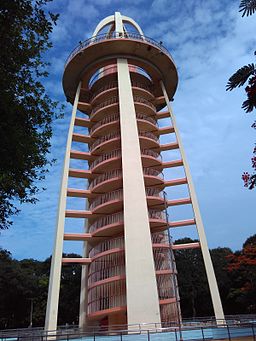 Annanagar Tower park is an important landmark in Chennai. Today, I went to a heritage walk on – ‘Social History of Annanagar’ conducted by Ms. Tirupura Sundari. The talk revolved around the history of Tower park — it was one of the first structures to be constructed in Annanagar to draw more people to the ‘India International Trade Fair’ held in 1968. Ironically, the fair was over-shadowed by the Tower as it became the main attraction. 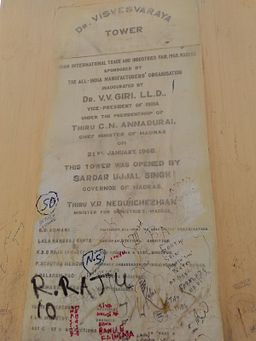 In the 40s and 50s, Annanagar was a village called Mullukkadu or Velangadu. In the 60s, this area was called the West Madras Extension Plan. Then came the Poonamalle High Road through which people were able to reach Annanagar. The Tower Park was inaugurated on 21st January 1968 by the then C.M. of Madras – C. N. Annadurai because the organizers wanted a quiet place around the city. The above photo shows the initial Tower inception plaque. Unfortunately, people have scribbled all over it! 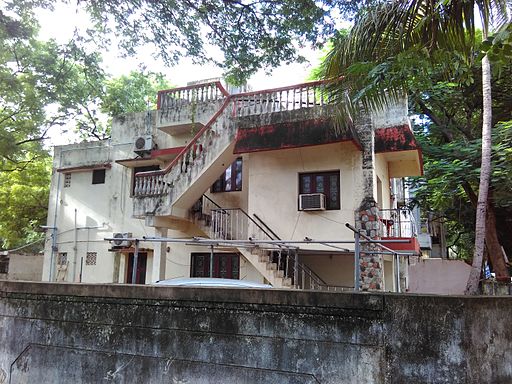 ‘Rukmini Nilayam’ opp. to Anna Adarsh school in Shanti Colony  (named so because the area was so quiet in those days) was one of the first houses that came in Anna Nagar. The above photo shows a house near Tower park that retains the early construction style/design. The plots around the Tower park were initially developed and saw rapid adoption. The Govt. laid the roads, electric lines, etc. and even constructed a few houses in this layout. The cost of one ground of plot back then was Rs. 7000/-.

This is the only arch left of the seven arches that were originally constructed around the Tower. Don’t confuse this with the Anna Arch, which is the twin arched larger structure constructed later during ’86/’87. Did you know that the Annanagar Tower, like the Eiffel Tower, was originally supposed to be destroyed after the fair, but was retained because people admired it? Ramco cements were one of the sponsors for constructing this Tower, and they used it in their advertisements well into the 80s and 90s.

This photo shows the original wall constructed at the entrance of the fair, next to the arch. The wall shows props from all major industry segments that participated in the fair. Tamil movies like Galata Kalyanam, Rickshaw-kkaran and Manal Kayiru featured Annanagar tower prominently. The Kandaswamy College across the main road was the VIP parking lot for the fair, and Arun hotel/Skywalk was a star hotel to accommodate visitors.

It seems, the Annanagar Tower was called as ‘Panchsheel Tower’ initially. It has 14 levels and one penal tower. People were allowed to climb up the tower until a few years ago (I have done it many times) and initially kids even used to cycle up. There is a lift that was in use earlier, but I haven’t seen it in action. I have written about my memories of Annanagar Tower earlier — I guess it’s time to write another article with new pics.

Annanagar Social Heritage Group is conducting an exhibition about Annanagar on 28, 29, 30th August 2015 at Indira Gandhi auditorium, SBOA School, Tirumangalam from 9 A.M. to 7 P.M. If you are connected with Annanagar in someway, you might want to go! Also, if you are in Chennai or come to Chennai, Annanagar Tower Park is a must visit 🙂

Photos: By Destination8infinity (Own work) [CC BY-SA 4.0 (http://creativecommons.org/licenses/by-sa/4.0)], via Wikimedia Commons.I am Rajesh K, the author of this blog. While this blog is my hobby, I am a Freelance Video Editor by Profession. If you want to make Videos for Business or Special Occasions, do visit my other website WOWSUPER.NET to see the portfolio and get in touch.