Thirukkadaiyur Temple, near Mayiladuthurai/Chidambaram in Tamil Nadu, India, is specialized and famous for conducting 60th & 81st Marriages. Recently, one of my uncle & aunt had arranged their 60th marriage to be performed here and I went to attend it. This Temple is called Amritaghateswarar-Abirami Temple and is dedicated mainly to Lord Shiva. 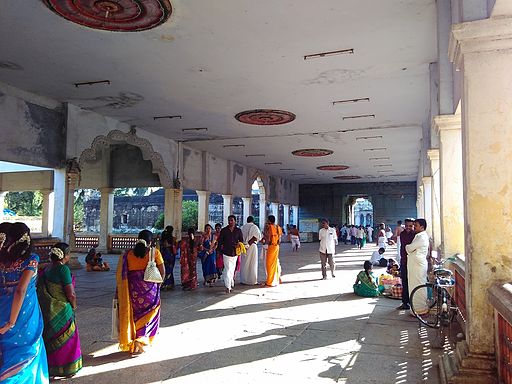 The Legend is that when Devas churned the ocean of milk to create Amruta – the liquid that grants immortality, they forgot to worship Lord Ganesha. Angered by this, Lord Vinayaka takes away the pot containing Amruta and hides it in Thirukkadaiyur, where he pours some of it over a Siva Linga created by him. Thus, it is believed that the Lingam in this Temple can grant longevity. ‘Amrita Ghat Eswarar’ literally translates to ‘Lord that leads to immortality’. 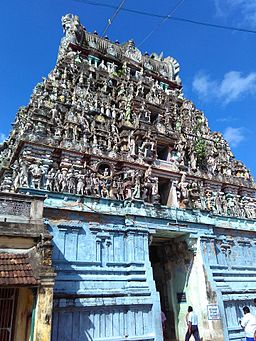 Probably that’s why one of the rituals they follow in this Temple is: relatives pouring water on the couples head celebrating their 60th Marriage. There are small compartments all around this Temple where Homam & Pooja are held individually for each couple. These compartments are small and does not have a physical barrier, hence around 20-30 relatives can gather around each couple comfortably.

Once the Homam, Pooja, and Water pouring rituals are completed, the Groom and bride dress up as mappillai and ponnu and the groom ties the chain around the bride once again for 60th marriage. Note that this Temple can get very crowded on Auspicious days – when we went, around 100 couples had registered to perform their 60th marriages. Each ceremony might take around 2 hours and it maybe better to arrange the ceremonies early in the morning to avoid the peak crowd. 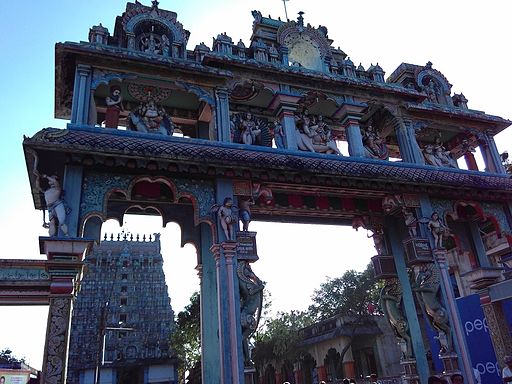 Actually, from Chennai I went to Chidambaram Temple first (will write the travelogue for that Temple shortly) and then reached Thirukkadaiyur by bus – it takes around an hour from there, but there are many buses. Then I visited Poompuhar, which is a tourist attraction nearby. I then went to Mayiladuthurai from where I had booked my train journey back to Chennai.

There is another interesting story of Markendeyan that is said to have taken place here. Markandeyan’s parents did not have children for a long time, hence they prayed devotedly to Lord Shiva. Pleased, Lord appeared before them and told them that they can either have a son who is exceptionally good but will live only for 16 years, or a son who is average and will live longer. The parents opted for the former.

When Markandeyan’s 16th year was approaching its end, his father asked him to hug the Siva Lingam in this Temple. When Lord Yama came to take him away, he threw a noose which tied Markandeya and Lingam together. Angered by this, Lord Shiva appeared and stopped Lord Yama. God Shiva also granted the boon to Markandeya to always remain 16 (Endrendrum Padhinaru!).