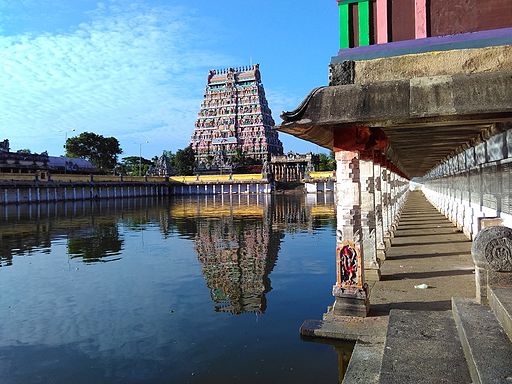 I went to the Thillai Natarajar Temple in Chidambaram, Tamil Nadu, in December last year, but am writing the travelogue only now due to sheer laziness. Anyway, this huge Temple whose main shrine is dedicated to Hindu God Shiva is spread over 40 acres. The main water tank that you see above is called Sivagangai.

Actually I was visiting Thirukkadaiyur, the Temple for sixtieth marriages nearby, and came to Chidambaram by train. Since I had some time, I thought why not visit this famous Ancient Temple also, which has been mentioned in Tamil Sangam literature even two millennia ago. I don’t think anyone knows how ancient this Temple is, but the current structure was mostly constructed during the 12th/13th Centuries. The Towers and other areas were added later on. 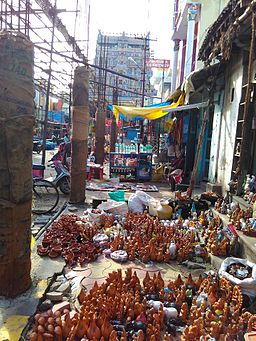 Since the Temple only opens after 4 P.M. or so in the afternoon, and I was early, I ate lemon rice with masal vada and sambar in a small mess opposite the road that leads to the Temple. It was awesome 🙂 Also, they were preparing for some event, hence the wooden logs you see above.

The Chidambaram Nataraja Temple has nine entrances and four huge towers like the above. Each Tower has at least 50 sculptures and the main Tower that houses the deity has a gold-plated roof. Although this Temple is dedicated to God Shiva, there are shrines for other Gods like Sivagami Amman, Vinayagar, Murugan, and even Govindaraja Perumal. Actually, the existence of a Perumal Temple within a Shiva Temple was contested a few times, the latest being in 19th Century, but each time the administration decided in favor of having it.

The Temple got its name due to the nearby Thillai (Mangrove) forest, Chittambalam – Open Stage, and Natarajar – Lord Shiva represented in the form of a Cosmic Dancer. It seems, the sculptures of this Temple inspired the classical dance form of TN – Bharata Natyam. Most Kingdoms and even the British patronized and supported the activities of this Temple. The Pachayappa’s trust plays an active role now.

There are five major halls inside the Temple and one of them contains 1000 pillars. This is one of the Pancha Bhoota Sthalams of the South and this Temple represents ether/sky. I have been to Kanchipuram and Tiruvannamalai Temples earlier, but am yet to visit Kalahasti and Tiruvanaikaval. Should visit soon.

Before leaving, I sat for some time under the main hall just before the Temple and this is the view of the Gopuram I got from there. Peace and serenity are the two words I would associate with this photo as that’s what I felt while sitting there.

No, I didn’t see the Chidambara Rahasyam as that was scheduled for later in the evening – 6 P.M. or so.